ALBANY, N.Y. â€“ Mohawk Ambulance ServiceÂ has updated its neonatal intensive care unitÂ (NICU) ambulance which is operated in conjunction with staff from Albany Medical Center. With a coverage range of 25 counties in New York and Western Massachusetts, the ambulance responded to its first call on April 6, 2016 and has since responded to more than 100 calls involving child and infant patients. â€œAmbulance 33â€ is the fifth ambulance purchased as part of a long-running collaborative project between Mohawk Ambulance Service and the Bernard & Millie Duker Children’s Hospital at Albany Medical Center.

The ambulance is equipped with a dieselÂ engine and spacious interiors, which allows AlbanyÂ Medical Center staff to more easily maneuver when treating patients. A Stealth Power smart-electric power system provides power to Albany Medical Centerâ€™s intricate on-board life support apparatuses, two medical grade air compressors to power breathing ventilators, and oxygen capacity to provide high-flow oxygen to a patient for nearly 24 hours. This system allows crews to turn off their engine while maintaining access to the power supply for up to six hours, in turn, reducing emissions. 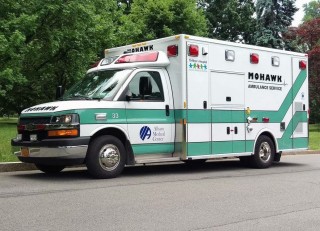 â€œThe technology and equipment used to save lives changes frequently and we must constantly invest in our companyâ€™s fleet and the equipment our professionals use to provide the highest quality of emergency medical care to the patients we serve,â€ said James P. McPartlon, III, president, Mohawk Ambulance Service. â€œWe are committed to saving lives and we will dedicate the resources necessary to provide the highest quality care and treatment to those who need and utilize our services.â€

Other features of the ambulance include a slide-out electric-hydraulic lift to assist in loading and unloading, an air-ride suspension system to provide a gentler ride and chains that can be added to the tires with the flip of a switch in the event of inclement weather.

« Previous Next »
To my angels that stuck by me and didnâ€™t give up on me on Motherâ€™s Day weekend when I couldnâ€™t breathe. As far as I know you saved my life. To the EMTs that had me in the back and took care of me, whatever you did helped me get to the hospital, thanks to your quick thinking and knowledge of what to do and your calming way. Sorry I squeezed your arm, I was scared to death! In 2 years I have had a stroke and I have bad kidneys, stage 4, Iâ€™m a mess, you have always been there for me each time Iâ€™ve gone to the hospital, which was a lot! If it wasnâ€™t for you guys, I would not know what would happen to me. Thank God for all of you people. I hope they know how lucky they are for your knowledge and caring and being there. For us - I hope your BOSS knows how valuable and great you are. You deserve a lot for what you do!! To all of you at Mohawk Ambulance, they deserve applause and more plus a raise. If I win the lotto I wonâ€™t forget you! You mean a lot to me. Thank you for being there. Youâ€™re one in a million and more! God Bless you always â€“ youâ€™re the best!Schenectady Resident