SCHENECTADY, N.Y. â€“ Mohawk Ambulance Service is announcing that a long-time team member, Marcus Beattie, is retiring today, May 14, after 34 years of service as an emergency medical dispatcher and paramedic for the company.

Marcus Beattie began his career in emergency services as one of the first paramedics in the capital region and also served as president of Riverside Ambulance. He joined the Mohawk Ambulance team in 1981 as an emergency medical dispatcher and established himself as a consummate professional with a calm demeanor. His voice is well recognized throughout local Public Safety Answering Points and hospital discharge planning departments. 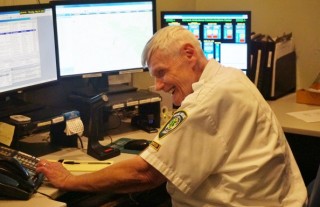 Mohawk Ambulance for 34 years,â€ said James P. McPartlon, III, vice president for Mohawk Ambulance. â€œWe deeply appreciate the commitment, knowledge and passion that he brought to his work every day and thank him for his service to our community.â€

At Mohawk Ambulance, Marcus played an integral role in converting the communications department from pen and paper to state-of-the-art computer equipment and GPS, and was instrumental in training fellow dispatchers. Also, he worked in Mohawkâ€™s Neonatal Transport Unit which operates in conjunction with Albany Medical Center Hospital, transporting hundreds of critically ill infants and children from outlying facilities to AMC for life-saving care.

Throughout his career, Marcus has been recognized multiple times as a Distinguished Service employee and has also received the Regional Communicator of the Year award from the Regional Emergency Medical Organization.

Marc and his wife, Gayle, live in Watervliet where they enjoy their cats, gardening and vacationing at Disney World. He is an avid sports enthusiast with a special fondness for the New York Yankees and NASCAR.

« Previous Next »
The staff were so nice and so friendly, that put my husband and me at ease being in the situation we were in. I was so nervous and they made me feel so much better.Albany Resident