Schenectady, N.Y. â€“ An accidentally-set fire destroyed a Schenectady apartment building in March 2015, killing four and leaving more than 60 people homeless and possession less. The local community responded immediately with an outpouring of support and donations. Mohawk Ambulance ServiceÂ employees, along with local agencies and community members, filled two ambulances with clothing, food, sundries, and various household items to donate to neighbors who lost everything in the fire. 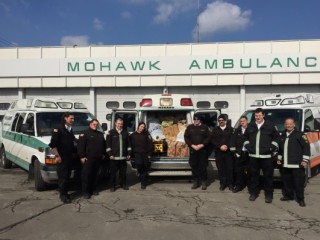 James P. McPartlon, III, Vice President for Mohawk said: We are more than willing to help our community and the victims of the fire get back on their feet. We express our sincere condolences to those affected by this tragedy.

The items were delivered to the Salvation Army, which in conjunction with the Red Cross, assisted the displaced victims. The five-story building was deemed a total loss and demolished days after the fire. Investigators determined the fire originated in a fourth floor apartment.

Mohawk Ambulanceâ€™s location on State Street in Albany is less than a mile from the site of the fire.

Next »
Going to the hospital is not fun, especially when youâ€™re 91 years old! But when youâ€™re accompanied by good, jolly and supportive individuals, as those people treating me were, then the rough edges are made less so and the experience made endurable. Bless you all! May we all meet again in more enjoyable circumstances!Troy Resident