Battaglia, an EMT & Driver Training Officer and Westcott, and EMT & Field Training Officer were among four Mohawk Ambulance crew members to be honored with a Star of Life Medal this year. Chief Supervisor John Large and Chief Supervisor, Communications & EMT Adam Nato were also selected to receive the award. The four award recipients join 17 other Mohawk Ambulance servicemen and women who have been honored with the Star of Life medal.

At the meeting, Battaglia presented Sen. Schumer with a Legislative Recognition Award on behalf of AAA. The award recognizes the Senatorâ€™s dedication to issues of importance to ambulance providers.

AAA represents hundreds of ambulance services across the United States which provide emergency and non-emergency care and medical transportation to more than 75 percent of the U.S. population. The Associationâ€™s annual Stars of Life awards publicly recognize and celebrate the achievements of its members. 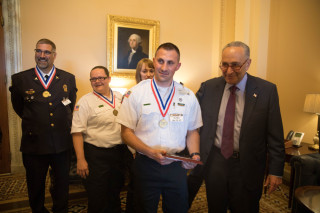 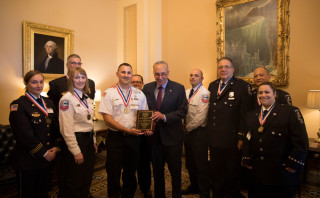 « Previous Next »
I wanted to say thank you and commend the crew as well as the fire department crew for the treatment and response time for my husband.Schenectady Resident